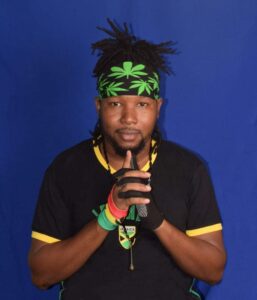 Prezenta aka Sera Chana Smith was born on December 3rd, 1986 to parents, Carol Dawkins and Melvin Smith in Vernamfield, Clarendon. He started his earliest leve lof education at the Power of Faith Basic School then moved on to Tread Light Primary.
He is also a former student of Garvey Maceo High and Vere Technical High.

Prezenta musical abilities were discovered at a very tender age of 5 years old, when he sang at his Basic School Graduation. From there after, he is being singing and deejaying, but his dramatic talent bursted out also leading up to his continuous performances highlighting these three elements of entertainment.
He won his first Gold Medal at the age of 14 years old for Speech and Drama for the Garvey Maceo High School.

While going to High School, he visited various studios, performing for charity events in and out of his Parish which he still does up to this date. He was given his stage name Prezenta by popular artiste Higher Boukie.

Higher Boukie was the 3rd place runner up on the popular Reggae Trail Competition and at the time Prezenta was performing under the name CR (CHANA RANKS).

His first professional recording “Better Live” was done in 2006 and was air played numerous times on Mello FM AND Irie FM. This song was his production and it was well received by the public.

Loss of management led to the slowing down in his career, affecting recording and air play, but he kept on pursuing his dreams, although it’s been so hard in the music business.

He never gave up and organized four different Community Shows such as Ghetto Splash, Artiste Link- up in his own community (Tread Light District). All shows were well supported with the likes of popular Artistes. In 2007, he won the famous Grace Foods Deejay Competition – Grace Trail Blaze in May Pen, Clarendon by making up a song about grace products.

In 2012, he did an audition with the Citizen Security and Justice Programme (CSJP), where he was selected and performed island wide with the Jamaica Constabulary Force (JCF) Band. This was covering all 14 parishes. He was considered to be one of the Top 3 best performers, most energetic and lyrical of over 26 young artistes.

He also worked alongside a radio programme team after meeting and acquainting himself with the popular radio personality Eva Sterling aka Mama Righteous, who brought him into the radio system as a Radio Prezenta and Disc Jockey.

He did host a Talent Programme called “Talent Tek Ova”, which was aired on Best FM

His popularity and respect has grown in the music fraternity and individually, where he has a wide fan base locally and internationally.